Login with SSAT ID
Lost your password? Need to register?
8 July 2021 By Guest

SSAT Leadership Legacy Fellow, Toyosi Fuwa, Bexley Grammar School, explains how from the very start it was important that curriculum and design lead this think piece; fostering a culture of inclusion within the school community.

My rationale and broader implications

As soon I started this programme, I knew I wanted the focus of my think piece to be on leading curriculum and assessment design. As I entered my fourth year of teaching, I began to form my vision for education and shape my educational principles around curriculum. I believe that education is a powerful tool and that alongside educating young people, a large part of being a teacher also includes encouraging their moral and cultural development. I have always seen the value of education in how it encourages, challenges, and edifies young people, as Professor Dylan William states, “a curriculum [is one] that develops character and resilience as well as knowledge and skills” (2020, p.18). [blogAdSide]

As a teacher, I have appreciated the flexibility the National Curriculum for Key Stage 3 History (the Department for Education, 2014) provides but the choice of opting-in can leave schools with outdated and exclusive curriculum’s. Therefore, I chose to create a six-lesson scheme of work for my department for Year 8 students looking at the experience of West Africa, before the effects of European colonialism, and the Kingdom of Benin in particular. Particularly given the events of this summer and frustrations towards the continued no mention of Black British History in the National Curriculum in England for Key Stage 3 beyond empire (DfE, 2014 and UK Government and Parliament, 2020), I find this to be all the more pertinent for the sake of both non- and students of colour (Thomas, 2020). Dr Jason Arday impresses that the “unpacking of various civilizations and histories that moves beyond surface engagement is integral with regards to proving a broad, worldview that will help individuals to circumnavigate a multicultural society” (2020, p. 12), thus it is crucial that the curriculum presented to students is both inclusive and representative. I believe that there are serious implications if the history taught to students remains Eurocentric, it presents a false and narrow telling of the world. Furthermore, so that all students can see themselves in the history taught to them beyond the tired narrative that people of colour were either enslaved people or savages in need of ‘civilization’, or maybe worse still, that they did not exist (Arday et al, p. 12).

It is problematic that the first mention of Black people in my school’s history curriculum was in reference to chattel slavery and realised that my own secondary school education was the same. A lot of time was spent reading widely and researching deeply to have a comfortable understanding and familiarity with the history I would be presenting. In exploring the nature of ancient civilizations and the characteristic features of past non-European societies, I realised that it was important that the lessons were also accompanied by a challenge of the western understanding of terms such as ‘empire’ and ‘civilization’. Whilst my lessons focused on West Africa, it is my intention that in the long term, the Key Stage 3 History Curriculum offered at my school will appropriately and adequately cover all continents. Ultimately a decolonising of the curriculum that reconsiders what is taught and how.

Outline of the lessons

It was important that lessons began before students learnt about the British Empire and chattel slavery to help contextualise the effects of colonisation that are often seen presently but more importantly challenging the narrative that Black people had no history prior to the beginnings of the transatlantic slave trade. Below is an outline of my lessons, in each lesson the purpose is to deconstruct misconceptions and present a more authentic retelling of (West) Africa and the Kingdom of Benin. It was important that the word was clearly explained and contextualised as its dismantling provided the framework for each lesson. Misconceptions such as:

At the start of each lesson, students were presented with African proverbs. These were primarily meant to be an engaging introduction to the lesson and a way for students to feel comfortable contributing in front of others on an aspect of history that they may know little about. But it also demonstrates the tradition of oral history in Africa, in how teaching and wisdom was primarily communicated verbally rather than being written.

In the first lesson students watched a documentary from the series, ‘Africa’s Great civilizations’ led by historian, Henry Gates Louis Jr. The series covers 200,000 years of Africa’s History and the formation of early human societies but from the one-episode students watch, I believe many misconceptions about Africa were undone and from there their understanding can be built on historical fact. In the second lesson, students were presented with an information sheet about West Africa and categorised it according to trade and money; jobs; and monarchy (e.g., how was the country governed). This was to develop their observations from the documentary and consolidate the new knowledge they had gained. For their first homework, students were instructed to listen to a podcast about the ‘Minon’, or Dahomey Amazons of modern-day Benin and answer several questions as the episode progressed. The homework demonstrated the important role of women in these societies as well as helped to set up the subsequent lesson which introduced the Kingdom of Benin.

The third lesson focused on students engaging with sources to support the retelling of the Kingdom of Benin and West Africa more generally. Students were presented with eight sources from the Kingdom, the two pictured below are an ‘Ivory Salt cellar [container / holder] showing European traders and their ship Benin, Nigeria’ from the 17th century AD (left) and a ‘Commemorative head of a Queen Mother Benin, Nigeria’, from the early 16th century AD (right). 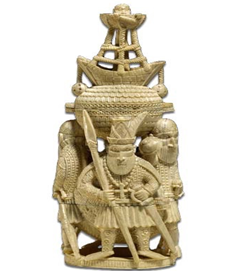 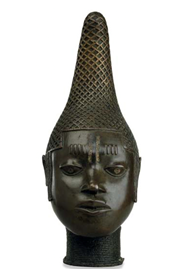 The sources were to support several judgements about life in the Kingdom that students had to correctly match and explain how the sources reflected the judgement. For example, “The Kingdom of Benin was rich in resources” or “Women were held in high regard in the Kingdom.” As a result of this main task, students were able to build an accurate understanding of the Kingdom and realise the complexity and sophistication of its organisation.

3. The decline of the Kingdom of Benin

In the fourth lesson, students looked at the decline of the Kingdom of Benin and how its relationship with Europe became more fraught as desires for land and colonies grew at the expense of flourishing cultures. Furthermore, a discussion on how much of Benin culture is in the hands of the British and the role Britain played in its decline. Students were given a card sort and had to organise the reasons for the Kingdom’s decline according to: trade and economy; British colonialism (anything to do with the British empire and taking over Benin) and leadership (problems with the Benin monarchy / oba [king]).

In the fifth and final lessons, students were given these two lessons to prepare their presentation on an African civilization and complete at home as their second homework. Students were put into groups of four and assigned a kingdom from the selection below:

The groups were given four focuses to help in the structure and presenting of their civilization. They explored: Where is the kingdom / civilization located; What impact did it have on culture, knowledge, and trade; Does the kingdom / civilization still exist today; Explain why / why not.  What does this kingdom / civilization tell you about Africa? The group presentation was the outcome of the scheme of work and was assessed, though not formally. Each group was marked out of five for each criterion (Information, Presentation, Group work, Creativity, and Effort) and then given a final written comment (pictured below with students’ names removed).

As I prepared the outcome lesson, I was most concerned with how intentional students would be with their research and presentation. In spite of the unfamiliarity of the topic, I was very impressed with students’ engagement with their African civilizations. Though understandably the quality of their presentation and cooperation varied from group to group, the information shared from the research and judgement provided on their civilization was brilliant. They were able to discuss what their civilization revealed about Africa as a whole and I thoroughly enjoyed how they presented their empire and challenged the misconceptions effectively. One group in particular made this comment about Ethiopian Empire, that it was ‘thriving not just surviving.’ Another explained the significance of the gold reserves in the Songhai Empire on the emerging European economy.

Overall, I believe I was able to develop stimulating lessons that encouraged students to challenge common misconceptions about (West) Africa and partnered with my colleagues in implementing a more inclusive History curriculum (Alexander, Weekes-Bernard and Chatterji, p. 15). In effect, students had become owners of their own learning (Williamson et al, 2020). It was and is evident that students want to learn and be exposed to unfamiliar and varied histories. Their engagement was the proof of that.

Developing a culture of professional development