Login with SSAT ID
Lost your password? Need to register?
15 September 2017 By Guest 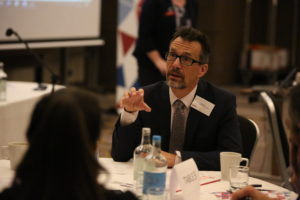 Lincoln Christ’s Hospital School is one of the 61 schools to have completed the EEF/SSAT project Embedding Formative Assessment this year. When the project started two years ago, I had the vital leadership backing as well as the impetus to drive the project forward. I set about choosing groups as considerately as possible and prepared to launch something central to our work: engaging students and making them active in the learning process.

Flexibility within clear parameters was key. For example, all staff attended meetings – or had alternatives so that they could keep up. Obligation was tempered by choice.

I did need volunteers to lead. Possibly the most humbling element of the project was the number of volunteers willing to lead the groups: from NQTs to SLT. I had enough staff to double some groups. And they brought with them an enthusiasm and willingness to welcome innovation that held the project in great stead for the first year’s work. As testament to their professionalism, staff generally asked only two things: was what they were doing right; and had they done enough?

The several visiting assessors who completed learning walks believed they had. Whether assessing our formative assessment, our pupil premium provision or our middle leadership, the impetus was evident and impressive.

It was evident in Miss Stenton’s experiments with hinge questions on a school field in PE, Mrs Jones’ yellow box marking that encouraged students to respond actively to marking, Mrs Smith’s use of different coloured highlighters in marking to give the students a clearer analytical approach, and the Silent Teacher demonstrations – these are just a few. Experimentation was rife. Because the groups were confidential, staff gained courage to try out ideas. Were their peer lesson observations exacting enough? Well, more than anything they opened a professional dialogue and a sustained focus, through regular twilight meetings that could develop organically.

The school stole a concept from the Matthew Moss School, Rochdale, where sixth formers coach year 11 students on a Saturday morning, and started it as an independent initiative within the project. Led by SLT, it meant no extra workload for staff but a potential for progress. In the first year, the Y11 students exceeded predicted grades in all subjects and attained a third to a full grade higher across all subjects when compared to the cohort as a whole. The results from this year have yet to be counted but the culture of independent study is catching on and an increasing number of students are seeing the sense in taking the responsibility along with the rewards of active learning.

In the second year, the strategies became part of whole-school policy and practice. They appear in the marking and feedback policy (and actually in the books); progress is discussed in tutor time, with students setting their own targets for improvement and charting them on flightpaths. Peer marking is encouraged. My audit assembly showed that students are experiencing these techniques daily.

So, to the impact. Our predictions for our results were optimistic but because they had been accurate previously, we felt, realistic. Ofsted didn’t. In short, they came, they shook their heads and they considered us specially measured. I don’t need to describe the emotional and logistical furore that ensued. Nonetheless, our predictions turned out to be indeed realistic; there was then much to celebrate this August. For the snapshot Ofsted took, it seems they had left their lens cap on.

Dylan (Wiliam)’s presentation to the EFA project schools made sense. As with the project, it was utterly practical and based on an encyclopaedic knowledge of educational theory and research. The Bushy Meads School students who also presented to us at the final celebration event on 8 September were testament to the project’s efficacy. And the sense of community from the staff from the different schools present was wholly re-humanising. The project ended with Dylan shaking my hand and those of my colleagues for our participation. I look forward to the same from any future visitors.

Get in touch by email (ggilbey@lchs.eu).

Lincoln Christ’s Hospital School carried out the programme using the Embedding Formative Assessment toolkit. Find out more about implementing the EFA programme in your school.

Watch a video of the celebration event led by Dylan Wiliam which took place on Friday 8 September.

How can teachers become more evidence-informed?