Login with SSAT ID
Lost your password? Need to register?
21 February 2019 By SSAT

… and encourages delegates to use their informed, professional judgements in the interests of students, in her main stage presentation at the SSAT National Conference.

Amanda Spielman began by discussing the kinds of discussions that Ofsted have with schools and colleges. These, she said, get mirrored in much of what’s discussed among SLTs and governing bodies. Along with the much-publicised consultation about the new framework due to take effect from this September, the inspectorate’s focus is “on having a really professional dialogue about the substance of education. That I hope will really help make people feel that those are the right conversations to be having.”

She recalled a recent meeting with a group of headteachers in which one said that since he’d become a head several years ago, he’d never had any discussions about what was taught and why in his school. So Ofsted’s current approach may well encourage and enable much more valuable discussions of this type.

In the past, Spielman conceded, “everybody has gone around trying to create elaborate number systems of various kinds to prove things and spending incredible amounts of time picking into this and that. Yet there’s actually a higher level, bigger conversation that really engages people in the stuff that matters without having to dive into mountains of analysis. I want to make sure not that we disregard outcomes, but that we’re really looking at the bigger picture, with reported numbers in their context, in their proper place, not taking them as a thing in isolation.”

“There’s a bigger conversation that really engages people in the stuff that matters – without having to dive into mountains and mountains of analysis.”

The inspectorate insists that it is not seeking to enforce particular approaches to curriculum, although “there is some that is really weak, a bit low level stuff grabbed from various websites offering resources. So, the challenge for us has been developing criteria that are broad enough to genuinely encompass the full range of ways of building quality [in curriculum] while at the same time to weed out the stuff that really isn’t giving children what they need. That’s what we’ve been testing in the 40-odd pilots we have done about the quality of education. And what’s coming back from that so far is very encouraging. We saw curricula that started with very different philosophical underpinnings, but nevertheless achieved their goal. So, what we’re doing is making sure that we set criteria that allow for that range.” 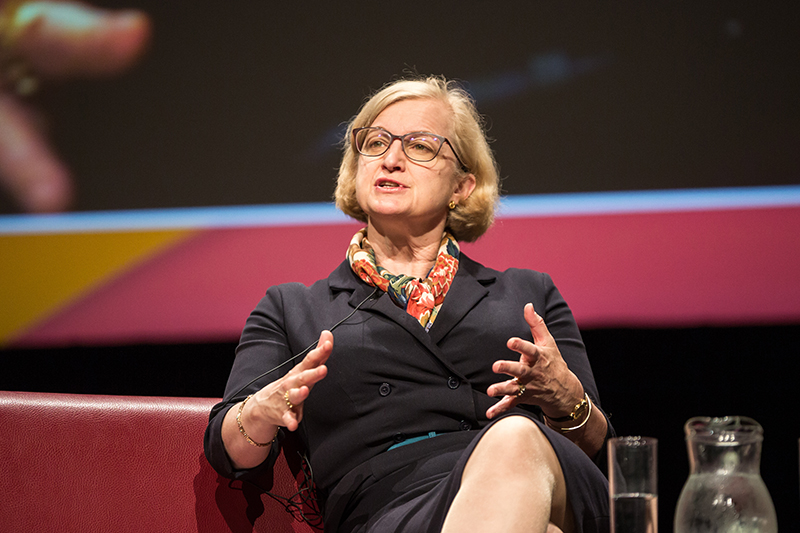 In response to a question about the clarity of these ideas as they will be expressed in Ofsted reports, she said: ”We’ve been doing focus groups with parents for example, asking, ‘what is it that you want out of it? What do you find useful?’ Because we want to invest the time that goes into writing and quality assuring reports only to the extent it’s actually valuable to somebody. Most of inspectors’ time is better spent on having really good professional conversations.”

In the pilots… “We saw curricula that started with very different philosophical underpinnings, but nevertheless achieved their goal. So, what we’re doing is making sure that we set criteria that allow for that range.”

A headteacher in the audience then asked about consistency in quality of inspection. “As heads, we all understand the range of ability of the staff in our schools. Would you say that that is true of the inspectors in your organisation? And can you offer some reassurance that there is sufficient quality assurance, training and monitoring so that what you’re talking about – a much higher-level conversation happening during inspection – isn’t undermined by individual subjectivity?”

Responding, the chief inspector noted that inspector training, which was already substantial, had been increased since she became HMCI – especially on aspects of the curriculum. Also, “we have a great deal of inspector monitoring both of the process of inspection itself and in the report writing stages. And our senior HMIs and regional directors put a lot of time into quality control, identifying the inspectors who need additional support or training. It is incredibly important for us that everybody is fully up to speed.

“We did a study last year looking at consistency of inspector judgement, and in these pilots of the new framework we have built in testing of the inspectability of the constructs. We will carry on with that after implementation, to make sure that what we’re attempting to judge we are doing as well as a human judgement process can do. Of course, it’s not like putting diamonds on micro scales. All of you here know that inspection is too complicated and too multidimensional an activity to do that. But yes, we really understand the importance of getting the best consistency and quality that we can.”

Session chairman Tom Middlehurst asked a final question: for one core message to take back into schools, about the new framework and what it might mean. To which Amanda Spielman’s reply was: “It’s about helping us all to have the right conversations that are really about education.”

The core message? “It’s about helping us all to have the right conversations that are really about education.”

She was a founding member of the leadership team of Ark, a multi-academy trust and charitable trust, in 2005. Between 2011 and 2016, she was chair of the exams regulator Ofqual and she has been Chief Inspector of Schools since January 2016.

Why Brexit should be taught in schools