On 17 December I sacrificed attending the SSAT staff Christmas do, to go back to my old employer Teach First for a day of ‘ideation’ as part of the ‘What will it take?’ summit on the headteacher recruitment crisis.

The mix of delegates for the day included a number of Teach First staff, some current teachers and headteachers (both TF Ambassadors and others) and representatives from education organisations including Future Leaders, Teaching Leaders, Place2Be, Teach for All, ThinkAhead, Future Frontiers, and obviously SSAT in the guise of me.

The facilitator took us through a standard innovation process: understanding the problem, generating solutions, developing the solutions, then narrowing down and honing the best ones followed by testing them in a dragons’ den-esque exercise.

We divided the problem into four interlinked aspects:

Of all the ideas that were generated the one I believe to be most promising requires a massive mindset shift in terms of our commonly accepted notions of leadership. That’s what I want to focus on in this blog. 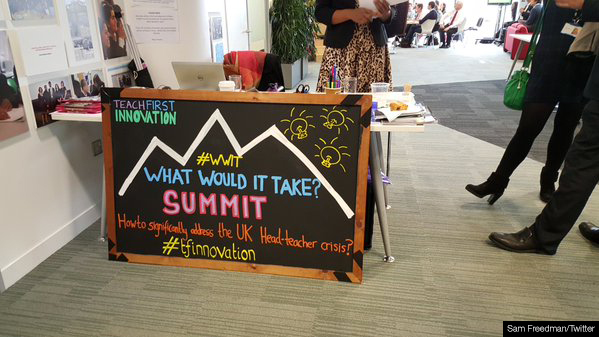 There are a few trailblazers who are doing this successfully already. In fact, SSAT has highlighted this practice in a number of member schools, including Batley Girls’ High School and Charters School, which were featured in our journal for Leading Change.

Similarly, both the Guardian and TES have written pieces about co-headship in individual schools and there is some further limited research here.

The model I’m most interested in is full co-headship. This is where one school has two headteachers who are paid on an equal basis (whether full time or part time with some overlap) and who are jointly and equally responsible for the school and where the arrangement is intentional – that is, part of a strategic move with governing body support.

This is not to say that co-headship as part of a phased retirement or interim joint stepping up of deputies to cover interim periods are not great ideas. Indeed I think they are, but I would argue they are sticking plasters rather than long term solutions.

Despite the few proponents of the model highlighted in the examples above being very positive it hasn’t taken off as common practice. Of the 174 headteacher vacancies listed on TES as I write, not a single one mentions joint or co-headship, and they are all listed as full time permanent positions.

As acknowledgement of the looming headteacher recruitment crisis grows, it is worth considering how the co-headship model might mitigate some of the factors that are cited as putting people off headship:

Beyond mitigating the perceived negatives of becoming a head, there is potential for the co-headship model to create some system-wide benefits, such as:

And so to the practicalities

Funding is probably the biggest barrier. As some of the cited examples show, there are innovative ways of doing it, such as both heads being paid half deputy salary and half head salary and operating without a deputy.

However, the potential additional costs of co-headship may be worth paying, when the alternative might be appointing a head who won’t be able to sustain themselves over the long-term; or having to go through many rounds of recruitment to find someone of the quality and breadth to steer the whole ship.

Breaking the mould, and supporting governors to be brave financially, will always be tricky in the current accountability climate. But the status quo is not good enough for school leaders, our children or their communities. So perhaps, when the time comes, advertising for co-heads is worth the risk.

Navigating the practical barriers to implanting such a model is going to be difficult, and more research and development is definitely required. I would like to see more investment in investigating how this could be workable.

I hope that many of the individuals and organisations represented at the ‘What will it take?’ summit will explore, promote and develop the idea.