Login with SSAT ID
Lost your password? Need to register?
10 October 2016 By SSAT 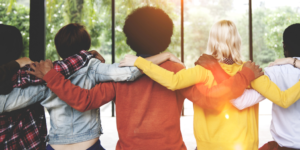 World Mental Health Day, which occurs on 10 October each year, aims to “raise awareness of mental health issues around the world and mobilise efforts in support of mental health”. So this is a good time to look at the status of mental health among young people, and the extent of the role that schools can, or should, play in supporting those that need help.

The good news is that the recognition of mental health conditions as true illnesses is more common now than ever. But unfortunately there’s still a lack of understanding around conditions like depression and anxiety – the two most commonly diagnosed problems.

Currently, one in ten children has a diagnosable mental health illness, yet 70% don’t receive support or help early enough.

The Guardian reported just this week that almost a quarter of a million children and young people are receiving help from NHS mental health services, showing “the scale of the growing crisis in young people’s mental wellbeing”. Experts have blamed growing pressures such as social media and the need to excel at school – which can lead to behavioural problems, anxiety, lack of sleep and disturbed eating patterns. Issues of poverty and family breakdown can also add to these problems. According to the Guardian, the figures have sparked calls for ministers, schools and the NHS to do much more to prevent, identify and treat mental disorders in young people.

This is, and always has been, important. However, with schools stretched in terms of time, resource and finances, they need to have the necessary support from the government and places or individuals to which they can refer pupils identified as needing help.

Health secretary Jeremy Hunt said that the government is prioritising tackling the problems of mental ill health in children and young people, and is funding an expansion of services. This sounds positive, but actually conflicts with recent reports that yet more cuts will be made to mental health services in schools next year.

Natasha Devon, former government mental health champion for schools, reported in the TES that Luciana Berger, former shadow minister for mental health, believes recently leaked documents prove that the government intends to spend less on mental health care for the third year running. This goes against all of the government’s reassurances that mental and physical health are seen as equally important, and that it’s committed to funding an expansion of services, as mentioned above.

If these cuts happen, it will put even more pressure on schools in terms of mental health care, and this could have a huge impact – not just on schools but also on the many young people who really need help.

There have already been some instances of counsellors’ roles being replaced with those of pupil peer mentors. This is likely due to a combination of reduced finances and the information from DfE claiming “the efficacy of peer mentoring in improving mental health”.  The problem, as summarised by Ms Devon, is that unqualified pupils will be trying to provide support to other young people with complex psychological needs, which isn’t what peer mentoring was designed for. At the very least, these peer mentors will need mentoring themselves from qualified specialists in order to be adequately equipped.

Teachers, of course, play a key role in pupil wellbeing. With appropriate training and confidence, schools can be well-placed to deliver mental health ‘first aid’ when required, such as spotting early signs of a problem and encouraging pupils to seek help.

Ideally, it should be embedded into the curriculum to make sure young people understand what they or their peers might be suffering from. By educating them on the importance of mental health, we can prevent young people from feeling isolated or being bullied because of it. Many have recommended that making PSHE compulsory will help tackle this issue, bringing problems faced outside of school to the forefront for young people.

However, teachers, pastoral staff and pupils should not be expected to go any further than this ‘first aid’ stage. Young people with diagnosable mental illnesses need medical or therapeutic care from a professional with no conflict of interest, and it’s vital that the government recognises this and ensures there are adequate services out there to help those that need them.

As an organisation that works closely with schools and aims to create opportunities for young people from all walks of life to succeed, NCFE fully supports World Mental Health Day and improving understanding of mental health in young people. It offers qualifications such as a Level 1 award in mental health awareness, which is aimed at learners age 14-16 and could complement a PSHE programme.

Surviving and succeeding in the first year of teaching: Being an effective form tutor