Today twelve organisations, including SSAT, have written to the chancellor asking him to raise the rate for sixth form funding, cuts to which have been even harsher than elsewhere in school budgets.

After two cuts in 2011 and 2013, the basic rate for most sixth form funding has been frozen at £4000 per student – despite inflation and other increased costs to running a sixth form. As a coalition of organisations that represent schools and colleges, we believe this rate:

This rate is significantly less than the (insufficient) funding for 11-16 year olds; which seems at odds with the importance and significance the government places on post 16 education. In 2015, the participation age for education and training rose to 18, and yet the government has not committed to fund this appropriately.

A lack of funding is, we know, leading to reduced curriculum offers: with 50% of schools and colleges dropping courses in MFL and over 30% dropping STEM courses. This not only deprives students of a broad range of choices but will have a direct impact on the economy in years to come.

Beyond the curriculum, school and college leaders are being forced to cut the pastoral support and extra curricula opportunities they can offer. At a time when we know students are suffering from increasingly poor mental health, this is extremely worrying. Cutting opportunities such as music tuition, competitive sports and drama and arts club will also mean that the most disadvantaged students will miss out; compared to their middle class peers whose parents will pay for this outside of school, or students in private schools, where this is often a strong part of the school’s offer. This undermines the government’s stated commitment to social mobility. 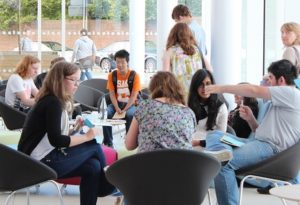 Sixth form education is at the heart of a socially just society. It is right and proper that we expect all young people to be in high quality education or training until the age of 18; are offered a broad range of rigorous academic and technical qualifications; and have opportunities to shine beyond the formal curriculum. This needs to be funded properly.

It is nothing less than a national disgrace that the government refuses to formally acknowledge the strain on sixth form budgets, and refuses to provide adequate funding for our sixth forms. We must raise the rate now.

Please tweet in support using the hashtag #raisetherate. The campaign is being led by the Sixth Form Colleges Association – and more information can be found on the dedicated campaign website.

Interdisciplinary collaboration on the wider aims of our teaching

‘Little extras’ is an insult to teachers across England