Login with SSAT ID
Lost your password? Need to register?
12 January 2017 By SSAT 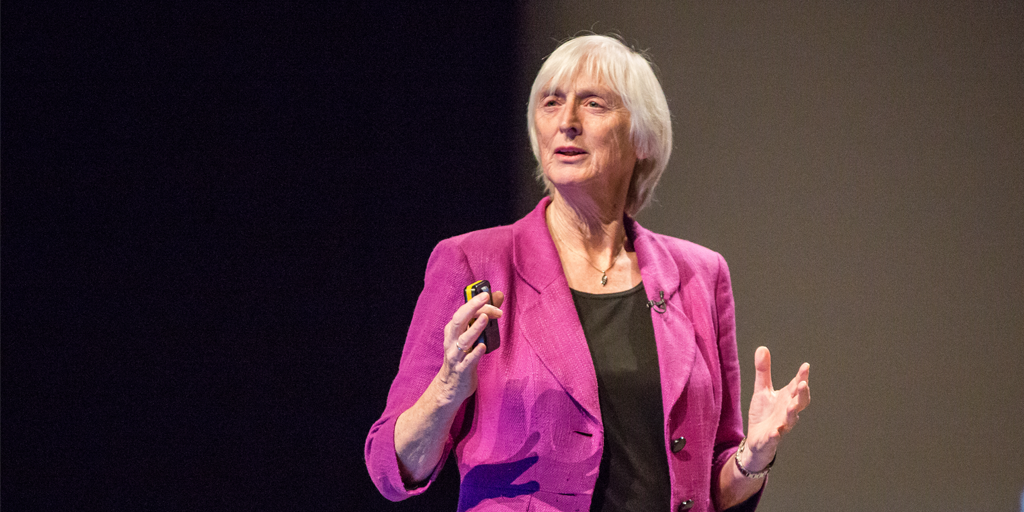 Baroness Sue Campbell, former chair of UK Sport, chief executive of the National Coaching Federation, and chair of Youth Sport Trust, was instrumental in Team GB and Paralympic GB achieving their greatest Olympic successes for over a century.

In line with her passion about education, Sue Campbell’s speech at the SSAT National Conference 2016 focused on “the journey we went on with UK Sport… and some of the lessons we can draw out of that about how we really drive system management.

“You [in education] work in a complex and difficult landscape. As leaders it’s in these challenging times that real leadership shines,” she said. “It’s easy to lead when things are good, but it’s so much tougher when you’re constantly challenged, as you are. You do one of the most important jobs that there is in this country.

“I went into education because I wanted to change lives. The tool I use is physical education and sport.” In 1996, she said, UK Sport, which manages the teams for the Olympics, was “in special measures. One gold medal, 36th in the medal table and dropping like a stone.

It’s all about culture

“Culture is not about a building or an environment or money; it’s about people, a belief that together you can change things. When I started in 2003, I believed that we could become the most successful Olympic and Paralympic nation in the world for our population size. I’d have been very rich if I had taken a pound every time anybody ever said to me, ’You can’t do that, that’s not doable.’ But it is doable. In whatever circumstances, however challenging your school is, it is possible if you can get hold of people and galvanise them to want to go on that journey with you. That’s what leadership is about.

“It’s not about management. It’s about getting people to join you on a journey. To sell them a vision that they want to buy into, a set of beliefs, going together on one team, one mission, to be the very best that you can be, not worrying about what anybody else is doing.

“Leaders really value every single individual. Now, I know, I’m a realist. I’ve managed organisations where there were many people I would like to have strangled, never mind lead! And I’m sure there are people in your school that are difficult, stubborn, stuck in their ways.”

She cited the example of Nelson Mandela, who “showed us that you can turn even these people if you work at it long enough and hard enough. During Mandela’s 20 years on Robben Island, he won over his warders – the very people who were containing him, who imprisoned him, who saw him as the enemy, a terrorist.” He didn’t try to impose himself on them, but he learned to be good friends with them, to understand them so they would come on the journey with him.

“And I think that is a tremendous lesson that Mandela taught all of us.

”Leadership is about your ability to galvanise everybody to go on the same journey. I occasionally do in-service days for schools. And I’ll always say to people when I’m coming, ’Is everybody here?’ And they’ll say, ’yes.’ And after five minutes, I hear the clanging and the banging of the people in the kitchen.”

Everybody needs to be there

“Everybody needs to be there. You know, when UK Sport decided to go on this journey, it wasn’t just about the athletes or the coaches or the sports scientists or the nutritionists. It was about the technicians, the people who organised the kit, the clothing, it was everything. If you want to go from good to great, or good to outstanding , then you’ve got to tackle the ‘impossible’ with everybody. And that includes the people who work in your kitchens, on your grounds… Everyone has to get the mission. Because it’s that daily contact with people, that daily aspiration, that daily concern and caring that starts to move the system on. And it’s not done easily. But it is about everybody in your school, regardless of the role they take.

“The other big thing for me was defining very clearly what was our moral purpose at UK Sport. I, like you, had enormous pressure from government. But I constantly had to ask myself, am I really about medals? What is it I’m about? One day, I was walking with the dog across Bradgate Park in Leicestershire, and realised I’m not about medals. If a young person has a desire, a dream, I don’t care whether it’s in woodwork or maths or sport or English or science, I want to make that dream possible. That’s my moral purpose. And if I take care of that moral purpose, those medals will take care of themselves.”

So to the school leaders in her audience, she exhorted: “focus on the children, what is right for them. Create an environment of success for them to achieve. The more you stress about it, the more pressure you create, the more your athlete doesn’t perform.

Create an environment of success. The more you stress about it, the more pressure you create, the more your athlete doesn’t perform

If I had stood in front of Jess Ennis just before she went out to do the heptathlon and said, ’For God’s sake, Jess, will you win me that gold medal!’ she’d have probably bopped me one for a start, but she would have been stressed out of her brains. ’Go out there, Jess, and do the best you can. You’ve trained, you’ve put the work in, you’ve got amazing commitment. Do what you can do.’ There is such a different pressure there.”

The children must understand moral purpose too

“And I do believe passionately that education must help our children understand their moral purpose too. It isn’t just about achievement in examinations. It’s about achievement in life.
The next big challenge for me, when I was clear what we were about, was trying to describe to my colleagues at UK Sport what great would look like.

She cited three lessons she gleaned from following the team around then world champion Michael Schumacher: the man who cleaned his garage floor wanted to be the best floor cleaner in the world (and went into great detail about it); those changing the tyres worked together to shave 0.01 of a second off the time it took (and coached each other, accepting each other’s advice); and in one instance the correct decision made under extreme pressure (staying out for 1-2 more laps despite running perilously low on fuel) won the race.

“So if you want greatness, those are simple strategies. Everyone in your school has to feel valued, has to belong, has to be part of your mission, has to want to be the best that they can be every day. Everybody has to strive to be 0.01 better day after day after day. And you as leaders have to have the courage to take big decisions. The ones you get wrong are the ones you’ll learn the most from. You have to reach out if you want to be world-leading.

”Leadership is the way you walk around, the way you say, ’good morning, and how are you today? Is your son better?’ Those things matter. That’s leadership. Managing? That’s a science. Leadership, it’s an art form. It’s about you expressing who you are in the most positive way.

Managing is a science. Leadership is an art form

“Your greatest gift as a leader is to know what questions to ask, and of whom. You can raise people’s aspirations, lift them to be different, unlock creativity by the questions you ask. Not by telling. Ask questions. Enable people. Encourage people. Support them to take those risks. Because for some of our young people, that creative, innovative approach will just click.

“So, don’t be inflexible about how you use your colleagues as leaders. Sometimes they have hidden talents. Don’t write anybody off. Don’t park anybody in place and leave them there. Think about how you want to use your talents. Just think about what their talents really are and use them to help you drive success.

“And finally I think great leadership means that you create a genuine belief that better never stops. My greatest satisfaction, having finished at UK Sport in 2013, was watching Rio in 2016.It told me that the system understood. Don’t let people rest. Keep striving. Keep searching. Keep looking – because you affect the whole of society through the next generation that you create.”

Working in a school within the SSAT network and registered in the member area of the website? Click here to watch Sue’s session in full.

If your school is part of the network and you haven’t registered, click here to quickly create a profile and gain access.

Ready for school? Supporting the transition into primary school