Login with SSAT ID
Lost your password? Need to register?
21 February 2020 By SSAT

By embodying the values of social activists – applying our values day by day, says Carmel McConnell MBE, the creator of Magic Breakfast during her presentation at SSAT’s National Conference 2019: Fighting for deep social justice

Change activist Carmel McConnell’s contribution to social justice has been wide-ranging, from determined anti-nuclear demonstrating at Greenham Common, to currently rewriting her book, Change Activist, to setting up Magic Breakfast, which has had great impact in helping young people from disadvantaged backgrounds to access their education. “First and foremost, I’m not a teacher, though I am honoured to support schools. I’m a social activist for us to make a better world. All of us here are trying to figure out what will help us to get from where we are now to a future which is hopefully going to be happier, healthier, and reflecting our values more.

“Here are a few thoughts from what I’ve learned over the years which have led to putting together Magic Breakfast – doing things like living at Greenham Common, getting arrested, being put in prison, becoming a senior corporate, then a government advisor and setting up a charity. A random set of things that I can’t honestly advise as a career path, because it’s pretty accidental.

“What is social activism? I believe we have in all of us the power to make a better world, to turn on our own values in a way that makes people feel: ‘yeah, OK. Doing the right thing is possible’. I built a business that was saying, the future is going to be technology-led, but it also needs to embody the values of social activists. It needs to bring together all that we know about the future in terms of global transparent markets, end-to-end visibility, transparency, everything that we want from a brilliant future, but it will only happen if we apply our values day by day.

“This book, Change Activist, was saying we can learn from social activists, people who have changed history and bring it into our day-to-day lives in a way that gives firepower, more strength. And this is my core thing: if we wait until we’ve got it all sussed out, the moment tends to have gone. The only way to do it is to get up and do it. My mission, I suppose, is to help everyone who is waiting a little, wondering if this is a good time.

“I regard myself as a complete amateur in everything. My family is Northern Irish and I grew up in London’s East End. My dad was a foundry worker and he was also a Gandhian. He used to talk to me about the life of Gandhi and what he had been able to do with his ideas. And it led me to have this constant theme of looking at the people who have stood up and said, my people need freedom, or I will sit on this bus, or I don’t think it’s right to have people of one colour separated it from another and bossing another. The people who have helped us as human beings to take the step towards more fairness are the ones I’ve tried to have as my mentors.

“When I got to university at age 20, I did the radio station, and a group of peace protesters came up, saying the Americans had first-strike nuclear weapons at a base just outside London, which were designed to start a war. The protesters came to the university and talked about why they, a group of Welsh mothers and fathers, had come from the Rhonda to this place called Greenham Common. One of them explained, ‘if we can stop the lorries from getting into the base, they won’t build these silos they’re planning to put the bombs in. And I’ve got three daughters. When the sirens go off, I don’t want to look at them and say I didn’t do everything I could to stop it. And so what we need, Carmel, is for you to join us when we go out and sit on the A34.’

“So, after feeling very sick [with fear], I went and sat in the road with them. And you know what? The lorries that came, just turned around. So I went back and wrote about it, saying people need to have a democratic decision about the kind of military that’s being put into the country. This hadn’t been voted on in parliament. I lived at Greenham for two years. I was arrested and put in prison a lot. And we won that campaign through the strength of the why: we want to stop a global nuclear war, that’s quite a big why.

“Later on, I worked for BT and got involved in the very early stages of the internet and got to learn about broadband. After a few years I wrote the book Change Activist (Change Activist: Make Big Things Happen Fast, Pearson Education, 2003), which was about helping people (and companies) to live a life based on values, to be authentic and unleash our potential.

“As part of the research for this book, I talked to a group of headteachers in Hackney, they told me about having to bring food into school for the children. So my first question was, why aren’t the parents feeding them? One teacher said, ‘the parents are hungry themselves. Their costs have gone up, their wages haven’t gone up.’ I was so shocked. That got me to start, by going to a supermarket and wiping them out of cereals to take to these five schools. And we saw in those schools that there were 30% fewer fights in the first break – just because I was bringing some cereal and some bread.

“In those schools, there were 30% fewer fights in the first break – just because I was bringing some cereal and some bread”

“And now, years later, we’ve got 483 schools using Magic Breakfast and we also have managed to get government support, because there are 1.8 million children in this country in food-insecure homes. Any child who wants breakfast can have it. If you know of any school that’s struggling with hungry kids, get onto me. Schools are telling us that they [free breakfasts] have improved educational outcomes for the kids through tenderness, punctuality, concentration, behaviour. The IFS and the EEF have done randomised controlled trials and showed that our schools bring about better educational outcomes by putting nutrition in.

“But, nationally, the situation is not getting better. Child poverty, which as a percentage of the population was 26% when I started, is now 29.6% and still rising.

“So whatever your school setting, even if you’ve just got a few kids who are eating the wrong things, really make sure that nutrition is a core message. It is social justice, fundamentally. The purpose, for all of us, is the same: to make a difference to the lives of these children.” 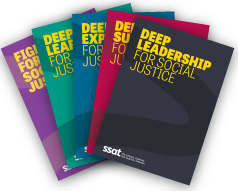 Learn more about SSAT’s campaign to fight to put social justice at the heart of the education system and download copies of the pamphlets in the series.

What essential experiences should the curriculum provide?