Login with SSAT ID
Lost your password? Need to register?
29 November 2017 By SSAT 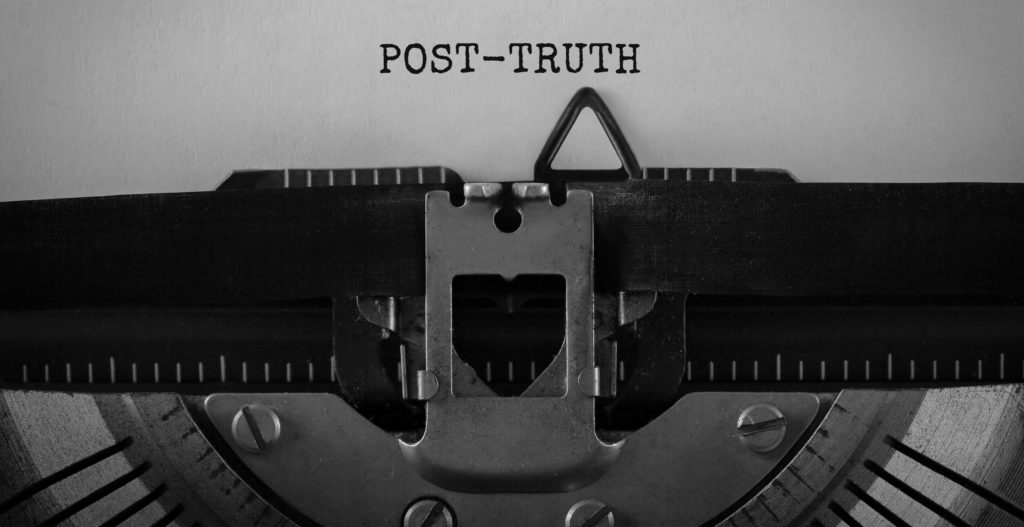 Part of the answer is to understand the processes by which we accept things as true that are not true, and how we can overcome that, writes SSAT editor Peter Chambers

Studying psychology at university many years ago, I was the ‘victim’ in a repeat of a celebrated experiment into conformity. Our tutor told us this was a simple experiment in visual perception: five of us students were asked to declare which vertical straight line of three was the same length as another line in the figure displayed. Unknown to me, the other students had been instructed to declare a wrong answer, so when being last it was my turn and I could see clearly that their apparent choice was wrong, I was astonished and conflicted. Despite some anxiety about being the only one with the ’wrong’ answer, I declared it.

The other students then grinned at me, and the tutor explained that the subject of the experiment was not perception but conformity. In the original series of experiments, by pioneering social psychologist Solomon Asch in the 1950s, some 30% or more of subjects altered their answers to conform with what they thought was the majority view. Some of the subjects assumed the rest were correct and their own perceptions were wrong; others knew they were correct but didn’t want to be different from the rest of the group; some even insisted they saw the line lengths as the majority claimed to see them.

Apparently, people conform for two main reasons: because they want to be liked by the group and because they believe the group is better informed than they are.

All this is relevant to the current concern with fake news and ‘post-truth’, as one of three new books titled Post-Truth demonstrates. In Post-Truth: how bullshit conquered the world, James Ball covers much of the ground others have done (Trump, Brexit, the role of politicians, media old and new, social media, why BS works…), but better. He provides more relevant detail than I’ve seen elsewhere, more rational arguments, and clear explanations of the causes and motivations. Most important, he outlines ways for us to know the truth and to overcome the BS and lies that can cause so much harm, not least to young people learning to cope with this world.

These issues were helpfully covered by some of the presenters at SSAT’s National Conference last week. Chartered College’s Dame Alison Peacock, for example, has drawn attention to the vital need for greater skills in statistical analysis, data synthesis and the challenging of prevailing views – which are rare ‘even among academics and learned professionals.’
Other examples included Ashok Jansari, who spoke of how ‘some people are abusing the public through the types of information from psychology and neuropsychology that they shouldn’t use in this way. For instance, as most people know now, there’s no evidence that “brain training” works in the real world.’
And Professor Paul A. Kirschner addressed this issue strongly: ‘a major concern is that understanding about when, where and why particular research evidence should not be used is lacking in both researchers and practitioners. Teachers … are not trained in understanding educational research, so it’s very hard for them to know how to use it. What they’re getting instead comes from: the media, which has headlines based on nothing; educational ‘gurus’ (eduquacks, I call them) propagating myths; or vendors trying to sell products which they say are backed by evidence, but often aren’t.’

James Ball’s book is described by former Guardian editor Alan Rusbridger as ‘new and important … by one of the smartest of the new generation of journalists and thinkers,’ Ball has worked at Guardian (surprise), Washington Post, and the Bureau of Investigative Journalism, among others.

Among the key points:

Perhaps the most challenging aspect of this book is that the author maintains we all have a role in the acceptance and spread of fake news and BS – and also, more encouragingly, in countering it.

We all have a role in the acceptance and spread of fake news and BS – and also, more encouragingly, in countering it

Ball gives examples of common misperceptions that encourage prejudice and social harm because so many people believe them without checking, and/or distrust official statements. In the UK, for example, the general public commonly believes that immigrants comprise 31% of the population (the true figure is 13%); 30% of the population are black or Asian (11%); 24% are Muslim (5%); and one in six teenage girls get pregnant, when the true figure is one in 165.

So, the author demands, ‘how often do you look for a fact-check on something you agree with versus something you don’t?’ Our tendency to share information and views we agree with creates a ‘filter bubble’ that shields us from dissenting opinions and takes us further away from the centre, as we conform to our groups. This fuels a polarisation into extremes, and undermines the possibility of rational discussion, even about important issues.

Our tendency to share information we agree with creates a ‘filter bubble’ that… fuels polarisation into extremes, undermining rational discussion

Ball quotes Demos researcher Louis Reynolds, who stated that we have to teach young people, from an early age, how to spot manipulation, to counter grooming efforts, to challenge extremist views and spot falsehoods, online and offline. And, to illustrate sources’ reluctance to admit the truth, he quotes Ben Goldacre who in 2011 challenged a PR agency promoting a story claiming that 34% of teenagers faked serious health problems to gain attention. His questions – how did they carry out the research? How many teenagers had they contacted? How did they check the demographics? – received no response.

We have to teach young people how to spot manipulation, counter grooming efforts, challenge extremist views and spot falsehoods, online and offline

Suggestions for politicians, social media organisations, journalists and other professionals include more widespread (and perhaps compulsory) use of fact checkers. The BBC and Facebook both claim to be boosting the effectiveness of their fact-checking processes. However, even such aids to spotting scams online can be undermined by fake review sites.

Children (and adults) should learn how to evaluate the sources of information and gain some rules of thumb for judging claims, even some practical statistics that can help to judge what’s really going on, Ball maintains. He recommends the 1954 bestseller, How to Lie with Statistics by Darrell Huff, which in a non-technical way outlines errors in interpreting statistics, including themes on using random sampling and why correlation does not imply causation.

On a more immediate level, James Ball suggests we should ‘engage system 2: stop and think for five seconds’. That would make it ‘much less likely we will share nonsense’ (eg ‘facts’ sourced via unconsidered use of the internet).

‘Engage system 2: stop and think for five seconds. That would make it much less likely we will share nonsense’

Read more about ‘post-truth’ on the SSAT blog: What should schools teach in a post-truth world?