The humanitarian crisis emanating from Syria is hugely politically and culturally divisive. Many teachers may see it as a hot potato best left alone. However, there will be few children who have not seen the distressing image of Aylan Kurdi, aged three, who drowned while fleeing from Syria to Kos on an over-crowded inflatable dinghy.

Last week was one of the rare occasions when front pages were united, social media feeds overtaken and television news bulletins dominated by the same image and, to an extent, the same content.

Students and teachers will all have a base-level shared understanding of the crisis – with the image of Aylan’s lifeless corpse helping to solidify, and make transmissible, the thoughts of many. This is reason enough for teachers to engage their students in debate around the central or peripheral issues that are raised.

However, the fact that this is a humanitarian catastrophe where society’s moral purpose, collective empathy and ability to effect change are called into question, are even stronger reasons.

Last week was one of the rare occasions when front pages were united, social media feeds overtaken and television news bulletins dominated by the same image

Instead of avoiding the most harrowing and powerful news story that many of our students will have come across, I would argue that it should be embraced, across subjects and sectors, as a topic that cuts to the heart of character education – resilience, efficacy, empathy and equality; the kind of people students will become; the kind of society they would like to live in.

Firstly, we cannot ignore the evidence of the power of an image to help us to communicate complex ideas as well as tug on the heart-strings and to elicit a deeply emotional response. They could question the morality of publishing an image of a dead child and whether the means justify the ends.

Ultimately they could discuss whether a child’s life is worth more than the many adults’ lives that we have been told about for months and years or where Aylan’s life sits in relation to Cilla Black’s – whose funeral, and its build up, were broadcast live on the BBC just days before.

Secondly, the media coverage can remind us all of the power of words and language. What is the technical difference between a migrant and a refugee? This may be a confusing issue for many students, but the difference is a real one and a straightforward one. The different uses of the terms, whether to obfuscate or to appeal, are always deliberate. 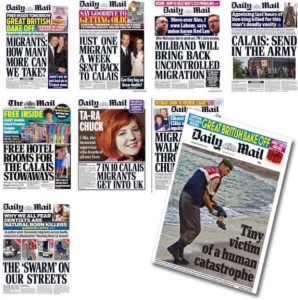 Thirdly, the circulating images depicting editorial stances turning on a sixpence raise many questions about the British Press. Do they set the agenda or follow it? Do they polarise the debate or communicate nuance? Is the human condition open to nuance in our 24-hour news society?

Fourth, it has been striking how impotent many feel in the face of the depth of the crisis. It is not immediately clear what ordinary people can do to satisfy their natural desire to help and to act. It reminds me of a letter that I once wrote to ActionAid.

My actions were futile, perhaps, but my need to act, even as a seven year old, was not. It may be that your class or school could explore the possibilities and undertake some collective action in one of the many ways that are starting to fill the initial void.

Fifth, empathy – in a school where many students may not be of British origin, how do we raise the issues sensitively? Surely, we search for the human element – we ask our students to put themselves in the minds of the refugees, the politically helpless, the voiceless and the desperate.

Empathy is also an important tool for the teacher who must understand those students who empathise as much with other actors in the crisis.

The border-guards, the military, the parent who feels that they will be less able to get a doctor’s appointment if the ‘floodgates open’. Where their empathy is directed will be a personal choice for the student, but there will rarely be a better opportunity to discuss and learn about the trait itself.

At the heart of this issue for teachers must be the extent to which it is your job to morally direct from your position of authority.

Sixth – an ideal example of democratic direct action. The day that the photo of Aylan’s body was published, 250,000 people signed an Independent petition calling on the government to take its ‘fair share of refugees’.

Many other similar petitions were being circulated in the hours and days after publication. With many accusing him of being ‘out-of-touch’, David Cameron appeared to bow to public pressure, the next day, at a news conference in Madrid.

What other issues could cause such a groundswell of public agitation at the stance of the Government? Could it be that universal, human values are at stake as opposed to the often under-defined ‘British values’?

A period of calm and stability?

Don’t let the politics get you down