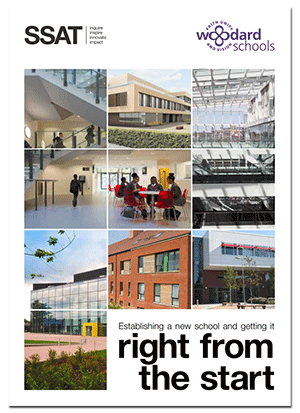 A free publication for those considering starting a new school. Find out more and download your copy.

This collection of essays, co-authored by SSAT and the Woodard family of schools, brings together the insights, experiences and expertise of school leaders, operators and authorities from a wide range of contexts within the maintained and independent sectors.

In doing so, it draws on the expertise both of established exceptional schools within Woodard, as well as some of the most successful new schools to open in the last five years.

Its purpose is to support and inform those with a role in establishing new schools: from governors, headteachers, CEOs of multi-academy trusts, leading academics, commercial experts, to policy advisers.

The report contains a wealth of ideas, strategies and practices that will help them ‘get it right from the start’ in order to deliver the very best education for the pupils they will serve.

Amongst the topics covered are: establishing in advance the education and business case for a new school; securing the engagement and support of communities and policymakers; and building the essential founding blocks for future success and sustainability.

The publication has been released ahead of the forthcoming general election in order to explore, from the perspectives of those operating new schools within it, the educational environment in which the next government will develop its schools policy.

During the office of the coalition government, fundamental changes have altered the landscape of education in almost revolutionary ways. This includes changes to the structure and control of schools, and it is this area that our publication covers

This context includes the explosion in the number of academies created since 2010, in addition to the establishment of free schools and university technical colleges. The principles of parental choice and a belief in a consumer-led, rather than producer-led, education system has opened up the possibilities for a wide range of interest groups to launch new schools with very different characteristics.

At the same time, the new government will face a number of educational challenges. It is estimated that by 2021, the country will need 350,000 additional places in secondary schools and half a million additional places at primary level.

Whether it is to give parents more choice, children a better education or society a more suitably qualified and skilled workforce, there is a growing appetite, need and opportunity to open a new school

‘Only this month, there is a difference of opinion between the official Conservative line (advised by Policy Exchange) that suggests schools can be opened anywhere, and the opinion of Shadow Secretary for Education Tristram Hunt, who has advised that new schools must be opened only in communities where there is an identified shortage of school places.

‘The new Woodard / SSAT publication demonstrates that, wherever they are opened, and whatever the political and ideological context, the really important thing is the children, the need to learn from experienced and successful pioneers and the imperative to get it “right from the start”.’

Woodard Schools – one of the largest providers of education outside the government and the Church – is a charity tasked with extending education, in accordance with the principles laid down by its founder, Nathaniel Woodard, in the 19th century.