Login with SSAT ID
Lost your password? Need to register?
26 September 2014 By SSAT 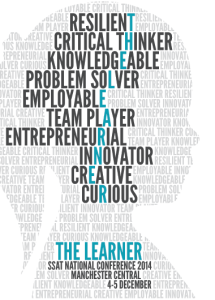 By building an aeroplane, students at North East Wolverhampton Academy have developed much more than just STEM skills. Blog 1 in our National Conference 2014 series looks at learning from the learners’ perspectives.

There aren’t many schools in the country where students get the chance to build a real plane – but North East Wolverhampton Academy is one of them. A mixed secondary school with just over 1,000 students, the academy faces many challenges, many linked to the poverty in the area – over 50% of their students are on Free School Meals.

The academy sees one of its core purposes as raising the self-esteem and confidence of students as well as providing them with the skills and exam grades they will need after school life. That is why they are always looking for innovative ways to engage their students inside and outside of the classroom.

When the opportunity came in 2011 to submit a bid to the Schools Build a Plane Challenge, an educational initiative launched by Boeing and the Royal Aeronautical Society, they knew it was a chance they had to take.

Stuart Blakemore, the school’s director of science and the man in charge of the project, explains how the programme aims to inspire young people to take STEM subjects ‘by giving them the chance to build a real light aircraft – a RANS Coyote S-6ES’.

When lessons finish every Wednesday afternoon a group of six or seven students assemble at a converted garage on the school site and work on everything from the plane’s wings and fuselage to its engine and electrical systems. New students are continually being introduced to the project.

Stuart is clear that there are many benefits. It develops their understanding of the scientific and engineering principles behind flight and enhances their project management, problem solving, team working and communication skills.

He was delighted at the impact the project was having and was quick to point out that it’s helped students in the classroom – bringing their learning to life. But he is also clear that ‘education is about much more than just exam results’, and this project, he believes, shows just what schools can do.

It has made a huge difference to some students’ lives, ‘two year 11 students’ for example ‘used the skills they had learned to get apprenticeships when they left school this summer’. As well as this other students have given presentations at the Farnborough Air Show and the Cosford Air Show, visited the Houses of Parliament and talked to staff at the Royal Aeronautical Society and Boeing.

Education is all about preparing people for life, making them useful members of society and giving them the wherewithal to make judgements, earn a living and bring up their own kids. We can see that this project is helping to do this.

Year 13 student John Phillips has been involved since the start as project manager and has seen the plane gradually take shape over the last three years.

As well as developing his technical knowledge and boosting his confidence, the opportunity has inspired him to aim for an engineering apprenticeship when he leaves school. He also hopes that when the plane is completed next summer he might get the chance to study for his pilot’s licence and actually fly it.

‘I have learned so much from doing this project – skills like riveting, that I didn’t even know existed before,’ said John, who is doing A-levels in physics and IT and a BTEC in engineering.

‘People at school come up to me and say “I’ve heard you are building a plane. Is it a real plane?” I say “yes. Why wouldn’t it be?”

‘So far we have done the whole fuselage, installed the cables, done all the riveting to the fuselage, added the flaps and the ailerons and put the engine on the front. We still have the wings, dashboard and electrics to finish.’

It’s not just about building a plane. It’s everything behind it – gaining confidence, giving presentations, developing project management skills. I wasn’t confident when I was younger but now I can speak in front of a large audience, manage a team of students, meet deadlines and organise events.

‘This project has prepared me for what to expect in the engineering industry. It has been a great opportunity to gain experience and skills that you can’t usually learn at school.’

Year 13 student Roshnee Verma, another member of the Build a Plane team, has also grown in self-confidence.

Roshnee, who is taking art A-level and BTECs in media and sports studies, initially offered to take photographs of the project as part of the school’s enrichment programme.

But within a few weeks she hit on the idea of advertising the project in school to get more students involved. She started putting on events and using Facebook, Twitter and Instagram to promote the team’s work.

She organised leaflets for the Farnborough Air Show, got art students to design a logo and come up with ideas for planes of the future and asked catering students to make food for a promotional event. She and John also write a blog – http://newabuildaplane.blogspot.co.uk – each week, detailing the plane’s progress.

‘When I started all this I was a very shy student, always standing behind everyone else. But now I’m out there giving speeches and advertising the project.

‘This has made me really confident and independent. I mentor some year 7 girls and have done activities like flying paper planes with them. I’m always telling them that they should get involved in Build a Plane.’

She firmly believes that learners grow in confidence when they get the chance to teach their peers.

My advice to teachers would be to give students a topic to research and ask them to independently teach each other by presenting it in front of the other class members.

‘That way every individual learns – you learn and your peers learn.’

See the plane and meet John and Roshnee at the SSAT National Conference 2014.