Login with SSAT ID
Lost your password? Need to register?
4 August 2016 By SSAT 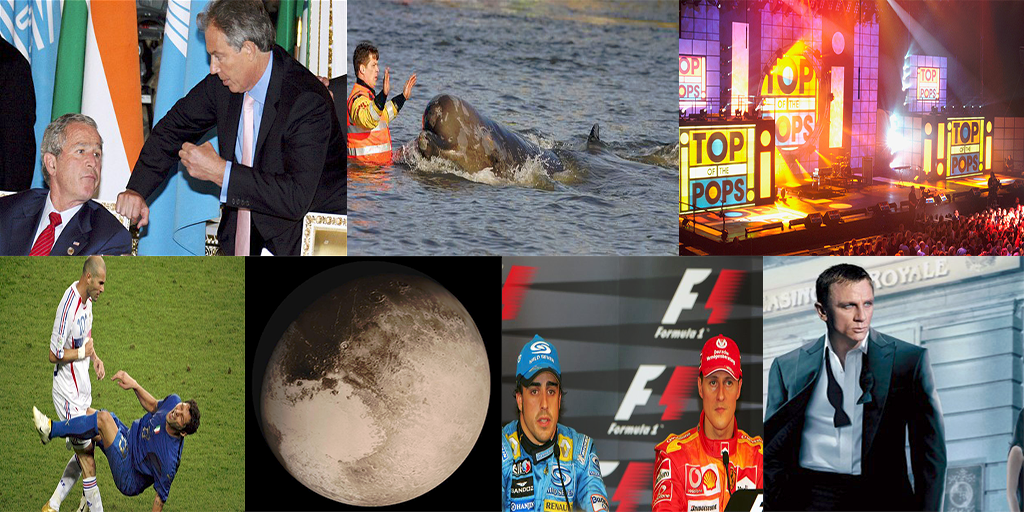 United States President George Bush allegedly greets British Prime Minister Tony Blair with “Yo, Blair, what are you doing?” during a G8 summit in St Petersburg, Russia on 17th July.

A juvenile female Northern bottlenose whale is discovered swimming in the River Thames in central London on 20th January. She sadly dies from convulsions during a rescue attempt the following day.

Top of the Pops says goodbye

The last edition of the weekly music chart programme Top of the Pops is broadcast on 30th July. Co-presented by Edith Bowman and Reggie Yates, the final show attracts 3.98 million viewers.

In the final game of his professional career, France captain Zinedine Zidane headbutts Italy’s Marco Materazzi in the chest and is sent off in the 110th minute of the 2006 World Cup final in Berlin. Italy would defeat France 5-3 on penalties after the game finishes as a 1-1 draw.

On 24th August, following years of intense debate, astronomers resolve to downgrade Pluto from planet to dwarf planet status. Immediately questioned by a number of experts, the decision continues to be disputed to this day.

A second place finish in the Brazilian Grand Prix on 22nd October gives Spain’s Fernando Alonso his second Formula One world title – making him the youngest double title-winner in the history of the sport.

English actor Daniel Craig makes his debut as James Bond in Casino Royale. Released on 14th November, the film would become the highest-grossing James Bond film of all time until the release of Skyfall in 2012.

Schools to have joined SSAT in 2006, and still be part of the SSAT network, include: