Login with SSAT ID
Lost your password? Need to register?
1 July 2015 By SSAT 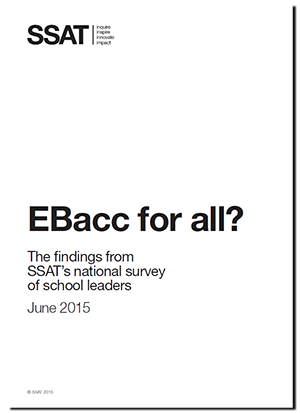 Following the announcement by Nick Gibb, minister of state for school reform, on 11 June, that the government was committed to honouring its manifesto pledge to require pupils to study the EBacc, SSAT – the country’s largest schools’ membership network – launched a survey for school leaders.

The intention was to build a rapid and representative picture of the positions being considered by school leaders. The full findings of the national survey are published in this report by Bill Watkin.

On 16 June, the secretary of state for education confirmed that the requirement to teach this academic EBacc curriculum will apply to all students, except those with special educational needs, in all maintained schools (though there is a willingness to explore the particular circumstances of UTCs and studio schools which may qualify for an exemption).

There is to be a period of consultation, but the government has indicated that it will focus on how this initiative will be implemented, rather than on if it should be implemented. It is hoped that this survey and its findings will be of value in the consultation exercise.

SSAT’s survey received 1500 responses in the first three days. The total number received when the survey closed soon after that was 1664. The headline message is the number of respondents prepared to refuse to teach EBacc for all, even if that meant a ceiling of Ofsted ‘good’ for their schools.

Only 17% of respondents said they would make the EBacc compulsory if that were a requirement for an ‘outstanding’ judgement from Ofsted, while 42% were certain that they would not.

But a more nuanced and varied picture lies behind these statistics. Some respondents felt that the policy would be beneficial for some pupils, especially middle and high attainers who might not otherwise have picked academic subjects.

People commented that this group could include a significant proportion of pupils eligible for pupil premium funding, and that this would help to raise their aspirations for FE and HE.

There was also a feeling that a curriculum pathway that preferences traditional, academic subjects over others should be available to all.

However, there is an overwhelming feeling that the EBacc curriculum is not appropriate for all, and that its enforcement would work against schools providing personalised pathways through a broad and balanced curriculum.

The subjects felt most likely to suffer include the arts, technologies, PE, RE and vocational provision. Respondents flagged the risk this presents to student engagement and school culture, as well as staffing and recruitment, with many concerned that the EBacc requirement could benefit the more able but disadvantage the less able.

The subjects felt most likely to suffer include the arts, technologies, PE, RE and vocational provision

Finally, the survey reveals that many respondents find this policy proposal a retrograde step running counter to the professionalisation of teaching.

At a time when teachers are being encouraged to get involved in developing a profession-led College of Teaching, and to make the most of academy freedoms, this policy appears to preference centralised control over nuanced decision-making by professional educationalists – and in so doing, shifts the focus from the needs of individual students.

Next steps? Download the full report here and please do add your views during the government consultation. SSAT will be submitting a response using the survey findings.

Share on TwitterShare on FacebookShare on LinkedIn
Tagged with: EBacc • GCSEs